This explainer looks back at the first presentation of the 2021 lecture series Rethink Energy: Countdown to COP26, which took place on Thursday, 29 April. Glenn Llewellyn, Vice President, Zero-Emission Aircraft at Airbus outlined the factors needed to lay the groundwork for a climate-neutral commercial aircraft. 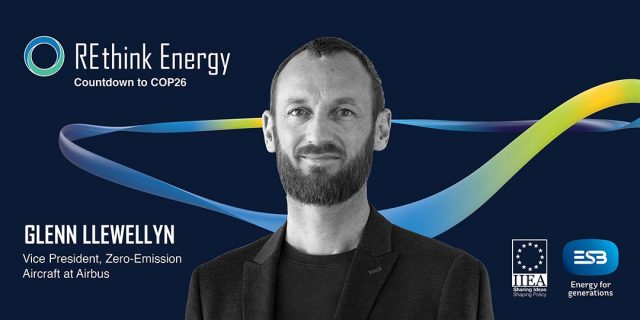 2. Mr Llewellyn projected that as the cost of renewable energy continues to decline, the availability of renewable power for aviation will increase significantly.

3. In September 2020, Airbus revealed its ZEROe project – which proposes three concept aircraft types for zero-emission aviation. All rely on hydrogen as a primary power source. Mr Llewellyn said that, for the aviation sector, hydrogen is essential to meet the targets of the Paris Agreement.

4. The hydrogen economy is expected to grow significantly over the coming decade. Mr Llewellyn stressed the importance of ‘hydrogen ecosystems’: the need for hydrogen use in ground operations at airports and across other sectors. He concluded by outlining Airbus’ commitments to help grow the nascent hydrogen economy.

5. ESB’s plans to convert Moneypoint power station into a “green hub” for Ireland include investment in a green hydrogen production, storage, and generation facility. Green hydrogen will play an important role to help decarbonise the hard-to-abate sectors of the Irish economy and will support the Irish offshore floating wind industry.

This explainer looks back at the first presentation of the 2021 lecture series Rethink Energy: Countdown to COP26, co-organised by the IIEA and ESB, which took place on Thursday, 29 April. On this occasion, Glenn Llewellyn, Vice President, Zero-Emission Aircraft at Airbus outlined the factors needed to lay the groundwork for a climate-neutral commercial aircraft. Airbus expects to produce the world’s first zero-emission aircraft by 2035.

In his opening remarks, Mr Jerry O’Sullivan, Deputy CEO of ESB, reflected on ESB’s Green Atlantic project at Moneypoint which will transform the site into a green energy hub, where a range of renewable technologies will be deployed over the coming decade with the capacity to power 1.6 million homes.

Mr Llewellyn acknowledged that an increasing number of countries have made serious pledges to meet net-zero emissions by the middle of this century and that greenhouse gas regulation is evolving quickly and that this trend is going to continue. He highlighted that Airbus recognises the need to move to a decarbonised future of flying. The aviation industry, through the Air Transport Action Group,  has set a target to reduce CO2 emissions by 50% in 2050 compared to 2005 levels and to reach net-zero by 2060.

Many in the aviation industry, Mr Llewellyn remarked, have been talking about biomass-based fuels as an important factor in sustainable flying for some time. However, he highlighted that there is a growing appreciation that to scale up sustainable ways of flying, the industry must move to synthetic fuels. The precipitous decline in renewable energy costs over the last decade, and which are expected to continue to reduce over time, make the prospect of net-zero aviation far more tenable for Airbus than previously forecasted.

Mr Llewellyn said that the challenge of climate change was also an economic one. He projected that as the costs of renewable energy decline the availability of renewable power for aviation will increase significantly over the coming decades.

In September 2020, Airbus revealed three new zero-emission concept aircraft types as part of its ZEROe project, which aims to have a zero-emission aircraft in the skies by the middle of the next decade. It is investing hundreds of millions of euro in the period between 2020-2025 to determine which aircraft to bring to the market first.

All the concepts in ZEROe rely on hydrogen as a primary power source. Mr Llewellyn said that, for the aviation sector, hydrogen was essential to meet the targets of the Paris Agreement.

Hydrogen is the most abundant element in the universe. It can be used as feedstock, a fuel or an energy carrier, and has many potential applications sectors of the economy.  Hydrogen can be produced from a wide variety of sources, including by the electrolysis of water using electricity from renewable energy sources such as wind and solar. This type of hydrogen is known as ‘green’ or ‘renewable hydrogen’ as no carbon is emitted.

Today, hydrogen represents a modest fraction of the global energy mix and is still largely produced from fossil fuels. The European Commission has emphasised that for hydrogen to contribute to climate-neutrality and to realise the European Green Deal, it needs to be upscaled and become fully ‘green’. Many indicators signal that the new hydrogen economy is close to a ‘tipping point’. In his address, Mr Llewellyn highlighted the emergence of a dramatic demand for hydrogen that has occurred over the last four years, and which continues to grow.

A key asset of hydrogen is its versatility. It can be produced, stored, moved in a variety of ways. Hence, hydrogen from renewable sources has the potential to be a key driver of the energy transition, especially in decarbonising the ‘hard-to-abate’ sectors of the economy, such as energy-intensive industries, long-distance transportation, pharmaceuticals, and the chemical industry. Renewable hydrogen will help to decarbonise energy consumption in areas where renewable electricity cannot.

In July 2020, the European Commission unveiled its strategy for a clean hydrogen roadmap for Europe. The continent is at the forefront of developing the relevant technologies needed for the EU’s hydrogen economy to materialise. Beyond its considerable potential in helping to deliver  a climate-neutral Europe, the development of a hydrogen economy is expected to play a major role in the economic recovery from the COVID-19 crisis. The Commission’s Hydrogen Strategy highlights that investment in hydrogen will foster sustainable growth, create thousands of new jobs, and unlock investment in key clean technologies and value chains.

The development of the European hydrogen economy has significant implications for Ireland. Jerry O’Sullivan, deputy CEO of ESB addressed ESB’s ‘Green Atlantic’ initiative, which was launched in April 2021, during his opening remarks at the beginning of this event. He noted that the ‘Green Atlantic’ project will transform Moneypoint power station in County Clare – Ireland’s largest electricity generation station – into a green energy hub.

Mr O’Sullivan outlined ESB’s plans to include investment in a green hydrogen production, storage, and generation facility. At this site, he remarked, green hydrogen will be produced from renewable energy and used for power generation, heavy goods vehicles in the transport sector and to help decarbonise a wide range of industries such as pharmaceuticals, electronics, and cement manufacturing in Ireland. Mr O’Sullivan also told the audience that ESB hopes to leverage green hydrogen production to support the Irish offshore floating wind industry, which is recognised as an essential pathway for Ireland to meet its decarbonisation obligations.

Hydrogen for the Future of Flying

Hydrogen can be used in three main ways on board an aircraft, Mr Llewellyn remarked. One option, he explained, is by using power-to-liquid synthetic fuels, which requires direct carbon capture. At present, Airbus’ aircraft are certified to be fuelled with up to 50 percent of these synthetic fuels. This emphasises, Mr Llewellyn argued, the valuable role that hydrogen plays in the short-term decarbonisation of aviation.

A second option is hydrogen combustion onboard an aircraft. In this case hydrogen is taken in its raw form and combusted in a modified gas-turbine engine to generate thrust, a process that is quite similar to traditional engine combustion.

A third option is the use of hydrogen fuel cells. This also uses hydrogen in its raw form and converts it into electrical energy and then in turn to horsepower, which turns the propeller or the fan on board the aircraft.

Mr Llewellyn noted that the focus for Airbus is on the second and third options outlined above. He highlighted that the use of hydrogen in its raw form will produce the best possible climate outcomes given its capacity to reduce non-CO2 emissions as well as contrails. Importantly, using hydrogen in these ways has the most economic merit and is the most energy efficient option compared to every other pathway that Airbus’ ZEROe project is evaluating.

Studies which have been conducted at Airbus show that this technology can be scaled up to serve both one-hundred and two-hundred seat aircraft with a range of one thousand and two thousand nautical miles, respectively. This, Mr Llewellyn argued, is very promising for the future of zero-emission aviation because according to data from 2019, approximately 60% of aviation fuel was used on flights of less than two thousand nautical miles. This means that there is a significant portion of energy use in aviation that could shift to hydrogen.

The Importance of the Hydrogen Ecosystem

Mr Llewelyn stressed that, in order to sustain the viability of hydrogen aircraft, it is essential to have a hydrogen ecosystem in place. If there is an absence of hydrogen infrastructure at airports throughout the world, a hydrogen-based aircraft will not be able to function. He highlighted that Airbus has begun extensive collaborations with airports and with energy providers to encourage the decarbonisation of ground operations in this decade by using hydrogen.

The typical airport, Mr Llewellyn remarked, is a logistics centre, like a maritime port, and is typically located in strategic areas which service large regions. He said that these attributes are important enablers to scale up hydrogen use and make airports renewable hydrogen hubs of the future. To develop global hydrogen ecosystems and to maintain confidence in their efficacy, Mr Llewellyn said that Airbus is developing a series of massive partnerships beyond the aviation sector and the maintenance of a hydrogen ecosystem will require a widespread and coordinated effort across industries.

Airbus expects to have zero-emission aircraft flying commercially by 2035. Mr Llewellyn accepted that this is an ambitious target, but one which, he said, reflects the magnitude of the climate crisis. Mr Llewellyn concluded his remarks by highlighting that Airbus, will continue to invest hundreds of millions of euro per annum, in the development of these projects until 2025 at which point, it will begin to inject billions of euro to develop a zero-emission aircraft and bring it to commercial service one decade later.

Figure 1 shows the three zero-emission concept aircraft known as ZEROe, revealed by Airbus in September 2020.  These turbofan, turboprop, and blended-wing-body configurations are all hydrogen-hybrid aircraft which can carry up to 100 and 200 passengers and with a range of 1,000 and 2,000 nautical miles, respectively. 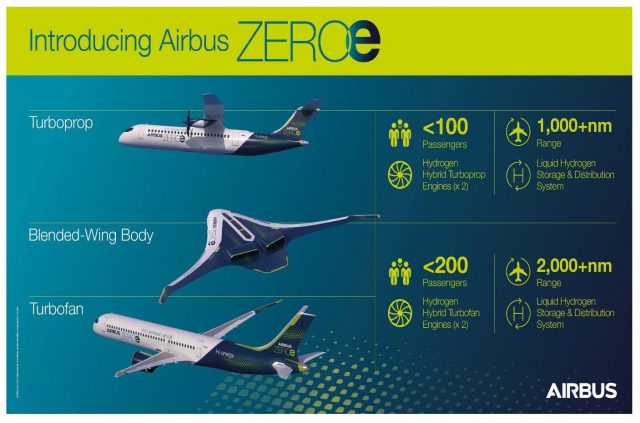