The Nordic Baltic grouping could prove to be a natural ally for Ireland in the EU of 27. As Tony Brown writes in this blog, the invitation for Taoiseach Leo Varadkar to attend their meeting on the eve of the European Council summit of 19-20 October is a significant development. 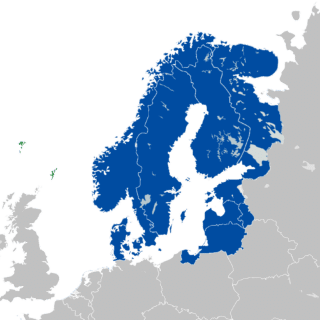 On his way to the October European Council, which took place on 19-20 October 2017, Taoiseach Leo Varadkar followed the important tradition of participating in the pre-European Council leaders’ meeting of the European People’s Party (EPP), to which Fine Gael has been affiliated since the 1960s. This gathering – and those of the other European political groups – offers important opportunities for networking, building alliances and seeking agreement on the various agenda items.  There has been much comment on the significance of personal relationships built up on these occasions, such as the obvious warmth in greetings between Enda Kenny and Angela Merkel. Leo Varadkar has clearly relished his introduction into this longstanding and always influential pan-European partnership.

On Thursday 19 October, the Taoiseach moved from the EPP meeting to another gathering of national leaders – that of the Nordic-Baltic Group – having been invited to attend, along with his Dutch colleague Mark Rutte.

The Nordic Baltic Eight (NB8) is a regional co-operation grouping including Denmark, Estonia, Finland, Iceland, Latvia, Lithuania, Norway and Sweden.  The heads of government of the NB8 meet regularly, as do the Speakers of Parliaments, Foreign Ministers, Sectoral Ministers, Secretaries of State and key political directors. There are also regular expert reviews and consultations on regional issues and relevant international topics.

These eight countries have experienced close links and interactions for centuries, with trade and commercial links providing a concrete basis for a relationship which was developed formally in the 1990s. The first step was taken by the Nordic Council, which initiated contact with the parliaments of the three Baltic states. Official and structured co-operation commenced in November 1991, in the Estonian capital, Tallinn, when the members of the Nordic Council attended the inaugural meeting of the Baltic Assembly which was an early initiative following the recognition of independence of the Baltic States on an international level.

An example of the work programme of the Nordic-Baltic Eight may be seen in the priorities set under the 2017 coordinating country, Norway.  The priorities are set in regional issues, including: regional security, cybersecurity, open and free media, strategic communication, energy security and energy markets, EU Eastern Partnership, the Estonian Presidency of the EU Council, economic development, competitiveness and innovation.  Another set of priorities relates to broader strategic issues such as: Transatlantic relations, the future of the European Union, Brexit, migration, the Bratislava process, Russia, UN issues and terrorism.

Six of the Nordic and Baltic countries – Denmark, Sweden, Finland, Estonia, Latvia and Lithuania -are Member States of the European Union.  Regular informal meetings of the Prime Ministers of what is now described as the NB6 take place on the eve of European Council meetings, while their Foreign Affairs Ministers meet on the eve of the General Affairs Council and at the Foreign Affairs Council meetings.

The invitation to the NB6 session was welcomed by the Taoiseach who clearly recognises that the departure of the United Kingdom will bring to an end a forty-year relationship at the Council table and in the Brussels Committee rooms, in which the two neighbours have shared views and approaches on many agenda items. The Taoiseach has commented that “I have to say that once again I am going to miss the United Kingdom when they leave,” and has underlined the degree to which British views on issues such as taxation and digital Europe were “very much in line with our thinking.” It has been argued by some commentators that Ireland is now ‘desperate for new allies’. Irish diplomats have been quoted as saying that the northern countries are potentially natural allies on many issues.

This development was foreshadowed in an Irish Times story in November 2016 which commented on an interdepartmental memo – entitled ‘Ireland post Brexit interests in the EU: alliances and sectoral analysis’ – circulated to Ministers and ‘seen by the Irish Times’. The memo was quoted as stating that “it will be important to identify those member states that, like Ireland, are likely to favour a future status for the UK as close as possible to the current arrangements, and those member states which might not be unduly concerned if a hard Brexit were to happen. In the former camp are probably the Nordic and Baltic countries, the Netherlands, Poland, Hungary, Malta, Cyprus and probably Germany.  In the latter camp are France, most of the remaining Mediterranean countries, Austria and probably Slovakia.”

The invitation to Prime Minister Rutte may be seen as positive from the Irish viewpoint as it is clear that he has established an immediate accord with Leo Varadkar who has invited him to visit Dublin early next year. The Taoiseach has indicated that he sees Ireland and the Netherlands sharing positions on many questions, as smaller, open economies conscious of the shifting balances in the EU as the UK departs.

Reporting to Dáil Éireann on 25 October 2017 the Taoiseach spoke of the meeting which he clearly identified as a positive development in the building of alliances in advance of Brexit:

In advance of the meeting, along with the Dutch Prime Minister, I was invited to join the leaders of the Nordic and Baltic countries, who meet regularly ahead of European Council meetings. Ireland is not part of a formal group in the EU, but as a small northern European nation and a trading country with an open economy, we have similar positions to the Baltic, Nordic and Dutch Governments, particularly economic issues. I was very pleased to have been invited to attend their meeting and to have the opportunity to share our views, especially on the future of Europe debate and on Brexit. I was delighted to have received such strong support for our position from all the Prime Ministers gathered there.

In the Irish Times, Stephen Collins commented that “it is encouraging to observe Irish politicians and officials preparing the ground for the challenges ahead.” The Taoiseach followed the European Council contacts with an official visit to President Macron at the Elysee Palace. Meanwhile, Foreign Minister, Simon Coveney, and European Affairs Minister, Helen McEntee, held bilateral meetings with their counterparts from Denmark and Portugal on the margins of Council sessions in Brussels. Minister McEntee then visited London for meetings with Ministers in the Foreign Office and the Department for Exiting the European Union, with the Shadow Foreign Secretary, Emily Thornberry, and the House of Commons Foreign Affairs Committee. Taoiseach Varadkar is ensuring that Ireland is both skilfully promoting its case in the evolving Brexit negotiations and standing firmly with its 26 partners as the EU deals with this historic challenge.