On Thursday, 12 July, the UK released its White Paper outlining the UK’s desired terms for the future relationship. This blog outlines the structure of the proposal and examines the proposed economic partnership.

On Thursday, 12 July 2018, the UK released a White Paper outlining in more detail the UK’s desired terms for its future relationship with the EU. The UK Prime Minister, Theresa May, has described the proposal as ‘comprehensive and ambitious’, and has noted the need for pragmatism and compromise in order to move the debate forward.

As seen in the diagram below, the White Paper outlines a proposal for future cooperation with three main pillars – Economic Partnership, Security Partnership and Cross-cutting Cooperation. It would be overseen by a joint governance arrangement modelled on trade deals elsewhere, such as the Canada-EU Trade Agreement, and the Ukraine-EU Association Agreement 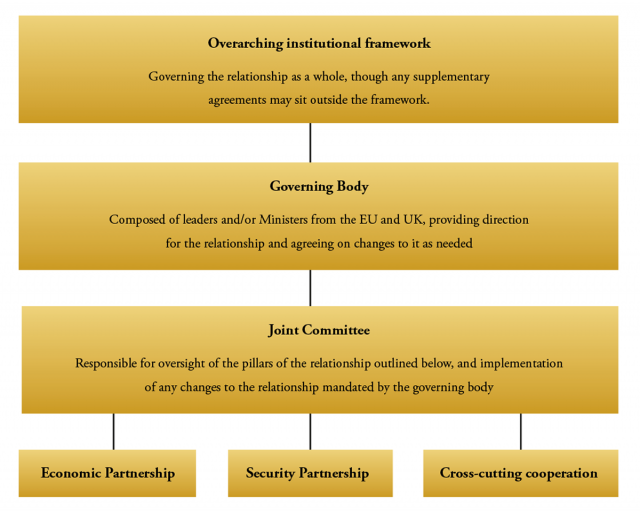 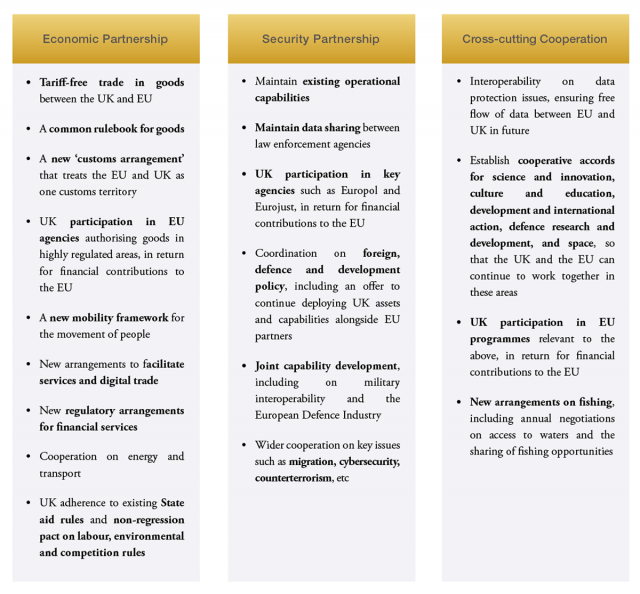 This blog provides an initial examination of some key elements of the economic partnership.

The UK White Paper outlines a number of key elements as the basis for a close economic partnership with the European Union. Some of these, in particular those with relevance to the Ireland-UK relationship, are outlined below

A common rulebook for free trade in goods

As part of a proposed free trade agreement, the UK and EU would “maintain a common rulebook” on all goods, including agri-food. As such, there would be reciprocal recognition that goods produced in the territory of one adhere to the standards of the other. As it is unlikely that the EU would change its own rules to accommodate UK divergence from its standards, the language of a ‘common rulebook’ appears to be code for the UK adhering to EU standards relevant to the movement of goods now and in the future.

If that is the case, then the UK would be a rule-taker in this area. Nonetheless, it wishes to have informal input and observer status during the creation of new rules, as well as observer status in EU regulatory bodies, such as the European Medicines Agency, for which it is willing to make financial contributions to the EU.

It is also quite notable that while the UK is committing to upholding standards in agri-food products, it is not committing to any other aspects of food policy that are not required to ensure the movement of produce across borders. Instead, it says it will “tailor its food policy to better reflect business needs, improve value for money and support innovation and creativity.” The precise nature of these changes remains to be seen, though for the time being it is worth highlighting.

To facilitate the frictionless movement of goods, the UK has proposed a phased introduction of a new Facilitated Customs Arrangement, in which the EU and UK would be treated as ‘one combined customs territory’. This formulation could be interpreted as the formation of a new customs union between the two parties.

In order to remove the need for customs checks at the UK’s borders, including between Northern Ireland and Ireland, the UK would commit to mirroring the EU’s customs rules in perpetuity, and no quotas, tariffs or rules of origin restrictions would apply to UK-EU trade in goods.

Interestingly, in its White Paper the UK admits that the proposed ‘common rulebook for goods’ would limit its capacity to make regulatory changes in the context of new trade agreements. This would almost certainly hinder the UK in signing any future comprehensive free trade deals with third countries.

One potentially problematic area of the UK proposal is under financial services. The UK’s request here is far-reaching and would require a change to the EU’s rules on third-country access to EU markets. In essence, the UK is asking to vastly expand the EU’s rules on equivalence in order to accommodate the interconnectedness of UK-EU financial services provision. It would also require the creation of new frameworks for supervisory and regulatory cooperation.

While the White Paper endeavors to make the case that this is required to ensure financial stability in the region, it is not clear that such sweeping changes would be acceptable to the EU.

The UK is clear that it intends to end the current system of free movement between the EU and UK, but expresses a desire to replace it with a new framework for mobility. It treats this as a largely economic issue, detailing the need for continued visa-free access for tourism and short business trips, allowing the movement of skilled workers between the UK and the EU, and facilitating the movement of students and young people for education and cultural reasons.

(Note that this is without prejudice to the Common Travel Area, under which Irish citizens will continue to be treated as they are today.)

One of the more notable sections of the UK’s proposal deals with fair competition post-Brexit – long an area of concern for Irish business. The UK makes a significant commitment in this regard: maintaining a ‘common rulebook’ on State aid (again, likely to be based on existing and future EU rules), establishing cooperative arrangements via the FTA on competition issues such as antitrust investigations, and importantly a ‘non-regression’ commitment on environmental standards and labour standards.

Facilitating all of the above is a basket of proposed additional agreements, which the UK deems ‘socio-economic cooperation’ issues. This includes proposed agreements on:

Conclusion – a basis for further discussion

In spite of some obfuscating language, there is some encouragement to be taken from the UK’s White Paper, particularly in the UK’s willingness to compromise on some of its red lines.

However, it is important to highlight a number of issues: first, while this is a ‘softer’ vision of Brexit, it is still not a ‘soft Brexit’. The UK is still leaving the Single Market and Customs Union, and there is no deal that can completely replicate the economic benefits of either. The UK attempts to mitigate this by proposing new, bespoke arrangements on trade, customs, services and financial services, but even if it were to achieve all its goals some economic fallout is inevitable.

Secondly, while the proposal opens the door to a more substantive discussion with the EU, there are areas in which the UK has arguably asked too much, and the proposal may necessarily be scaled back during the technical negotiations that follow. The EU has previously expressed reservations about providing the UK with special treatment in the financial services sector, for example.

Thirdly, there is still the issue of the backstop, on which no further progress has been registered in the interim. This may in part be a political calculation on the UK’s part – there may be a view in London that it is prudent to first sketch out terms for the future relationship that will obviate the need for the backstop – but it is still true that significantly more work will need to be carried out on this issue, in an exceptionally short period of time, to find a solution that addresses the concerns of all parties.

Negotiations between the UK and EU will resume in Brussels in the week of 16 July.

It should be noted that speaking to the IIEA Brussels on Friday 6 July 2018, the EU’s Chief Negotiator, Michel Barnier, indicated a willingness on the EU’s part to engage positively with a credible proposal from the UK. It will be hoped that the 12 July White Paper may now allow that conversation to begin in earnest.