Click here to view the video and audio podcast from this event. 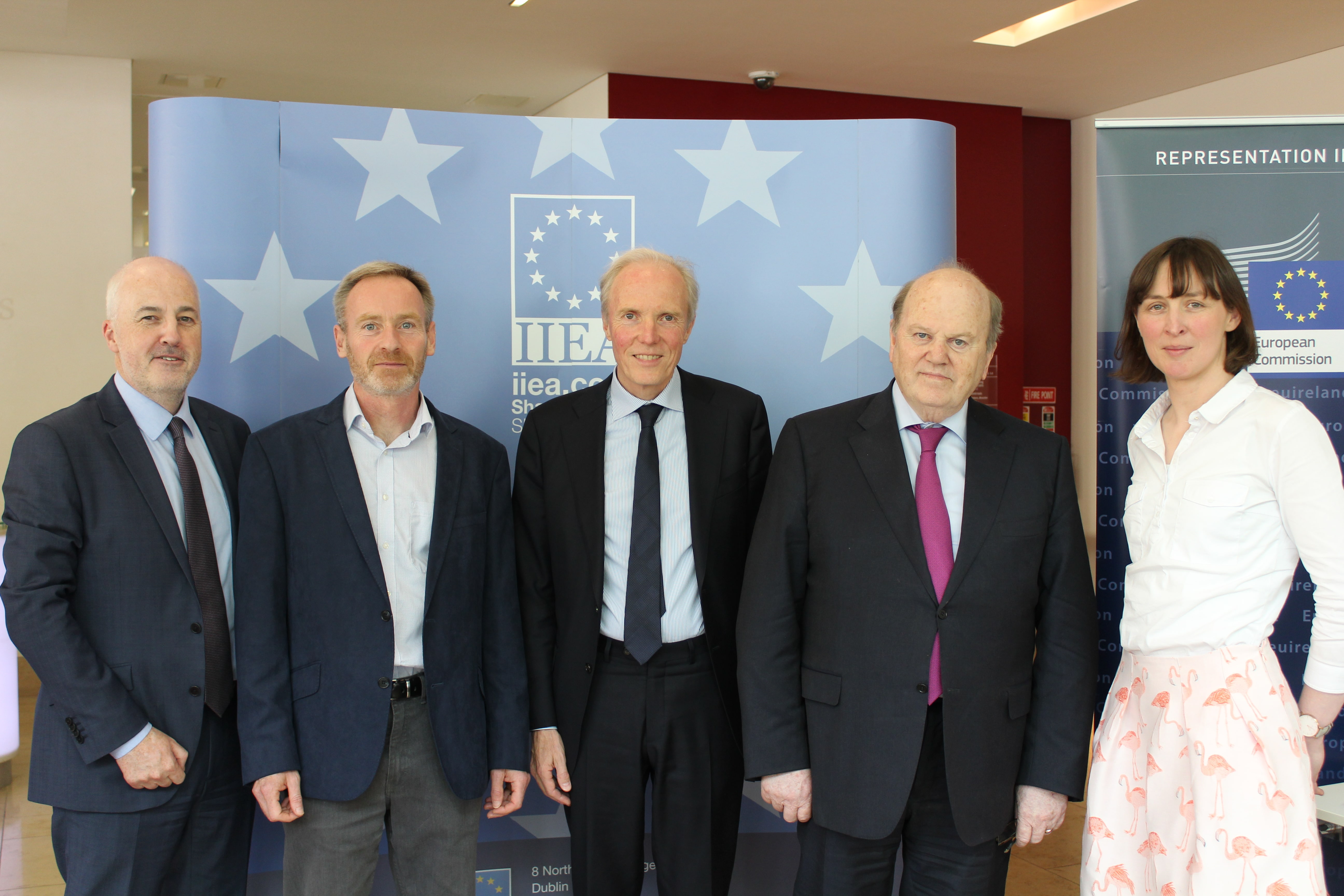 The IIEA/European Commission Seminar on Inclusive Growth: Recommendations for Ireland and Europe opened with a keynote address by Michael Noonan T.D. The Minister for Finance gave what he said would be his last significant speech before retiring from politics in mid-June. Minister Noonan said this was a “fortunate coincidence” as much had changed since he gave his “first significant speech” as Minister for Finance to the Institute in 2011. He reflected on how Ireland had successfully exited the EU/IMF assistance programme and immediately returned to the bond market without any precautionary support.

Minister Noonan paid tribute to those in European and international institutions who had helped Ireland get back on its feet. He noted the contributions of Christine Lagarde, the Managing Director of the IMF and former French Finance Minister, “a great friend of Ireland”, Wolfgang Schäuble, the German Finance Minister, who “never refused a reasonable request”, Mario Draghi, the President of the ECB, who “was always very helpful”, Oli Rehn, then Commissioner for Economic and Monetary Affairs, Jeroen Dijsselbloem, President of the Eurogroup and Klaus Regling, Managing Director of the European Stability Mechanism. The Minister also expressed his gratitude to Mark Carney, the Governor of the Bank of England, for designing the alternative promissory note arrangement when he was leading the Bank of Canada. He also noted the role played by Jim Flaherty, the late Canadian Finance Minister, who was “very good” to Ireland in the IMF and the World Bank. Finally, the Minister said AJ Chopra, the former IMF official responsible for the design and monitoring of the bail-out programme, “played his part” and was a “friend of Ireland”.

The Minister said that while much remained to be done “things have changed utterly” in the three years since Ireland exited the programme with the Irish economy, the fastest growing in Europe, “unrecognisable” and “on the cusp” of full employment. He assessed that this growth was stretching beyond Dublin and the east coast to every region and every sector. Touching on the theme of the seminar, he said the current growth was inclusive and argued that employment was the solution to many of the challenges associated with inclusion.

On the subject of the Country Specific Recommendations for Ireland, the Minister said the advice issued in the recommendations is “usually pretty sound”. He welcomed the 2017 recommendations and said he would bequeath them to his successor for implementation. In terms of the risks facing the Irish economy, Minister Noonan identified one internal risk and a number of external risks. Internally, he cautioned that Ireland’s high level of public debt remained a concern and therefore required the Government to use windfall gains, such as from the sale of AIB, to pay down the debt. He emphasised that, on a per capita basis, Ireland’s debt remains one of the highest in the world. The debt needs to be reduced not just in proportional terms (i.e. as a percentage of GDP) but in actual terms, the Minister argued.

Externally, Minister Noonan identified the economic challenges associated with Brexit, which could range from a “moderate” to a “massive” risk for Ireland. He briefly discussed the potential for tariffs to harm the competitive position of Irish producers exporting to the United Kingdom. “Single Market under another name” would be the best possible outcome for Ireland, he assessed. The second external risk highlighted by the Minister was the economic policies of President Trump in the United States. While changes to the US corporate tax code were unlikely to be of any significant detriment to Ireland, particularly with the White House not choosing to advance the Republican border tax proposal, Minister Noonan said the protectionist tendencies of the new administration were a threat to Ireland because of the country’s highly globalised economy. “We live by trade”, he stated.

On European economic issues, the Minister said the ECB’s easing policies were successfully supporting the recovery across the continent. He remarked on the failure of the so-called populist wave to secure electoral victories in Europe so far this year with a “stabilisation around the centre” materialising instead. On the prospects of deeper economic integration in the euro area, led by a renewed Franco-German alliance, he said he was concerned that the Commission no longer represented and defended the interests of smaller Member States. “As far as I see now, in its modern manifestation, the Commission promotes the interests of the larger countries”, Minister Noonan told the seminar. He said this was evident in the Commission proposals on the Common Consolidated Corporate Tax Base (CCCTB), which he said disadvantaged small Member States who produce goods and favoured large Member States with big markets. If the Commission did not return to protecting the interests of smaller Member States, Minister Noonan said he would be hesitant to support efforts at further economic integration. Concluding his remarks, he noted the importance of bolstering investment in the euro area and said that Ireland would support efforts by President Macron to secure modifications to the “one size fits all” fiscal rules. 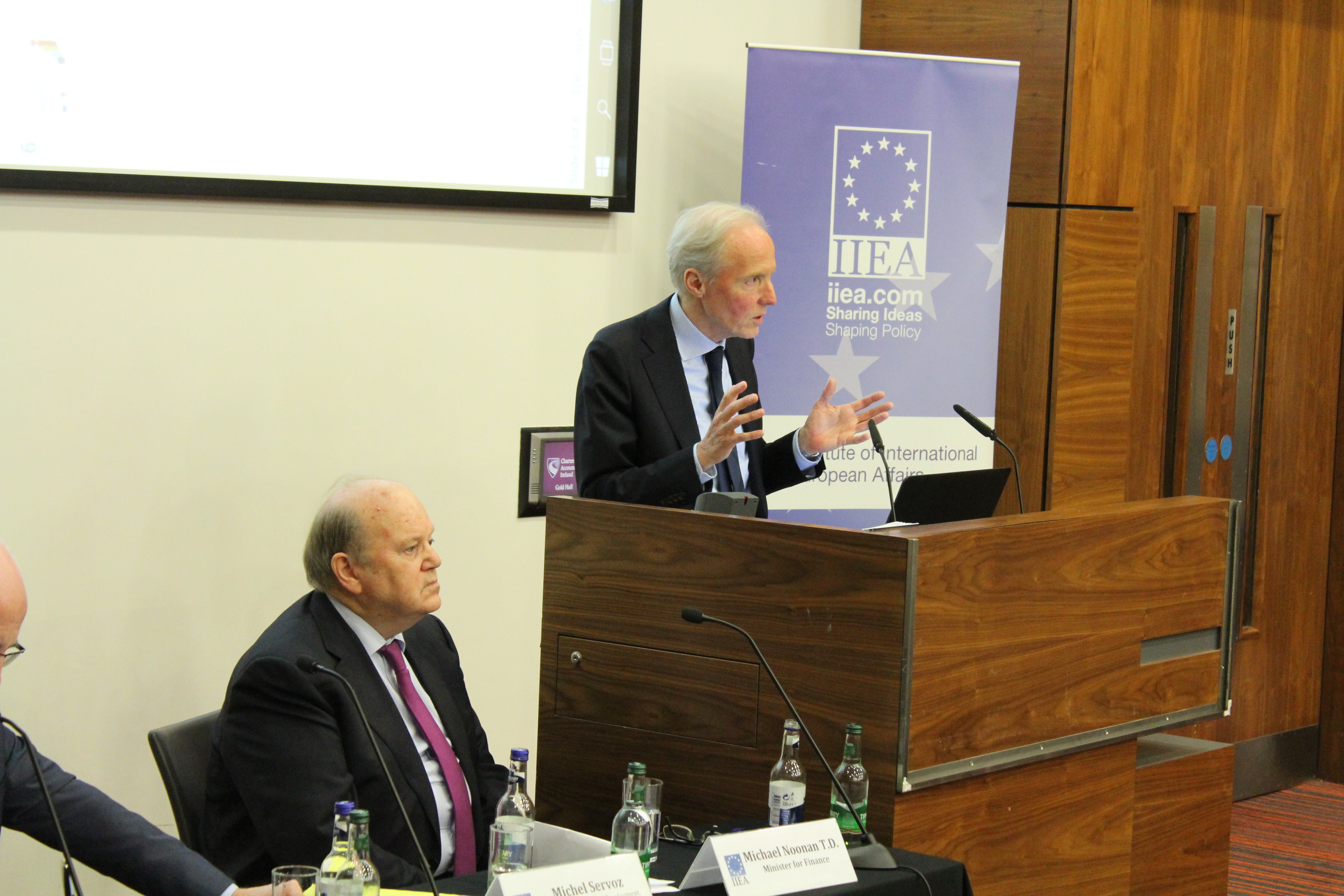 In his keynote address to the seminar, Michel Servoz, Director General of DG Employment, Social Affairs and Inclusion at the European Commission, provided a detailed overview of the Commission’s ongoing efforts to greater reflect social issues in the European Semester economic co-ordination process. The Director General began by paying tribute to the cooperation that exists between the Irish authorities and the Commission on the Country Specific Recommendations – he noted the contrast between his constructive dialogue with officials in Dublin and the reception he received in the Hungarian capital Budapest two weeks previously.

On the quest for inclusive growth, Mr Servoz highlighted a number of challenges such as retraining those affected by automation and digitalisation to ensure they have the skills for the future, ensuring those in “non-traditional” employment have access to social protection, and dealing with economic divergences across and within Member States. There was a need, he said, to restore the “convergence engine” through the proposed European Pillar of Social Rights.

The Director General said Ireland’s recovery was very impressive, particularly when compared with the performance of other Member States. The “job rich” nature of the recovery was also very welcome, but, Mr Servoz said, there are a number of outstanding challenges relating to long-term unemployment, childhood poverty, childcare and housing. The “number one issue”, he asserted, was the need to ensure the education system was in tune with the skills required by the labour market.

He concluded by reiterating that the Commission understands the unique circumstances in Northern Ireland and the importance of the Common Travel Area to Ireland ahead of the Brexit negotiations, and by expressing the wish of the Commission to enhance its engagement with social stakeholders during the European Semester process. Mr Servoz expressed his admiration for the social dialogue in Ireland, which he said was one of the reasons for Ireland’s economic success. 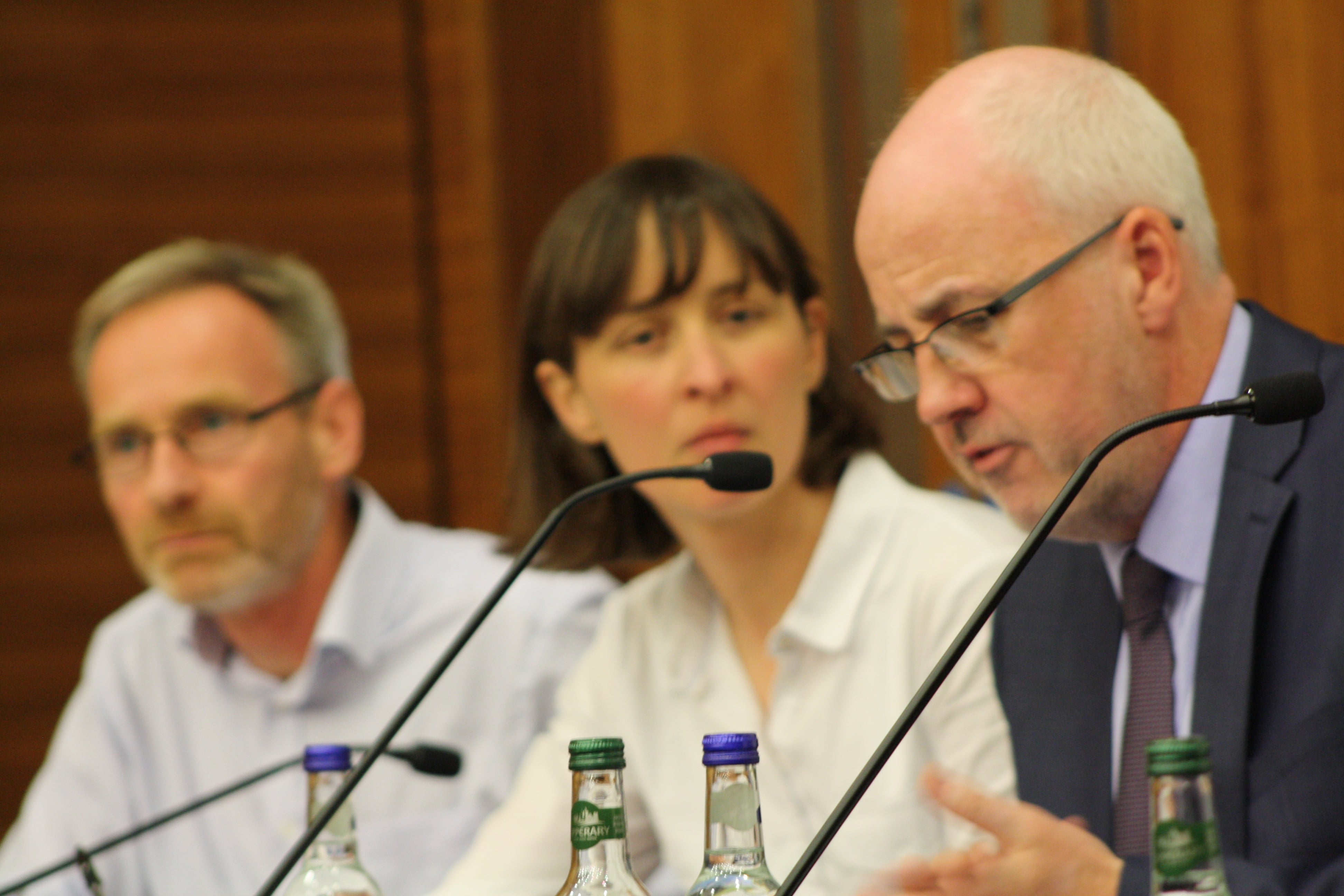 The panel discussion began with remarks by Rowena Dwyer, Chief Economist at the Irish Farmers Association. Offering her assessment of the Country Specific Recommendations for Ireland, Ms Dwyer said she was struck by the Commission’s explicit recommendation for the use of write-offs for viable businesses and households affected by non-performing loans. On the question of inclusive growth, she argued that there was a case for targeting public expenditure on community and small business focused renewable energy projects. Such projects would have the “double dividend” of helping Ireland meet its renewable energy targets, while at the same time supporting economic growth and generating income in areas, sectors and businesses that otherwise might not be performing as well. In her concluding remarks, she noted the ongoing debate regarding the constraints placed on public investment by the EU fiscal rules and said it was contradictory for the Commission to recommend investment in areas such as transport, water and innovation while simultaneously limiting what can be spent in these areas through “rigid” fiscal rules. Ireland, she said, should be more vocal in advocating greater flexibility in the rules.

Paul Ginnell, Policy Officer at the European Anti-Poverty Network (EAPN) Ireland, then offered his analysis of the recommendations for Ireland. Mr Ginnell said EAPN examines the European Semester, and the Country Specific Recommendations, and asks whether they will create a fairer and more equal society. He began by discussing Ireland’s poverty reduction target to reduce consistent poverty to 2% or less by 2020, highlighting recent statistics showing that 8.7% (403,000+) of the population is in consistent poverty. He said there was a real need to invest in social infrastructure in Ireland, particularly with regard to housing, childcare and healthcare. EAPN would, Mr Ginnell said, support proposals for greater flexibility in the EU fiscal rules and would oppose plans to use windfall gains to pay down the debt rather than use these funds for investment in infrastructure. While acknowledging the contentious nature of the topic, he said there was a need to broaden the tax base and increase Ireland’s tax to GDP ratio in order to fund the public spending necessary to improve social and economic conditions. He said EAPN did not support the Government’s pledge to phase out the Universal Social Charge. Mr Ginnell concluded by emphasising the need to proof policies and budgets over the long term to ensure that they are effective in addressing poverty and inequality. 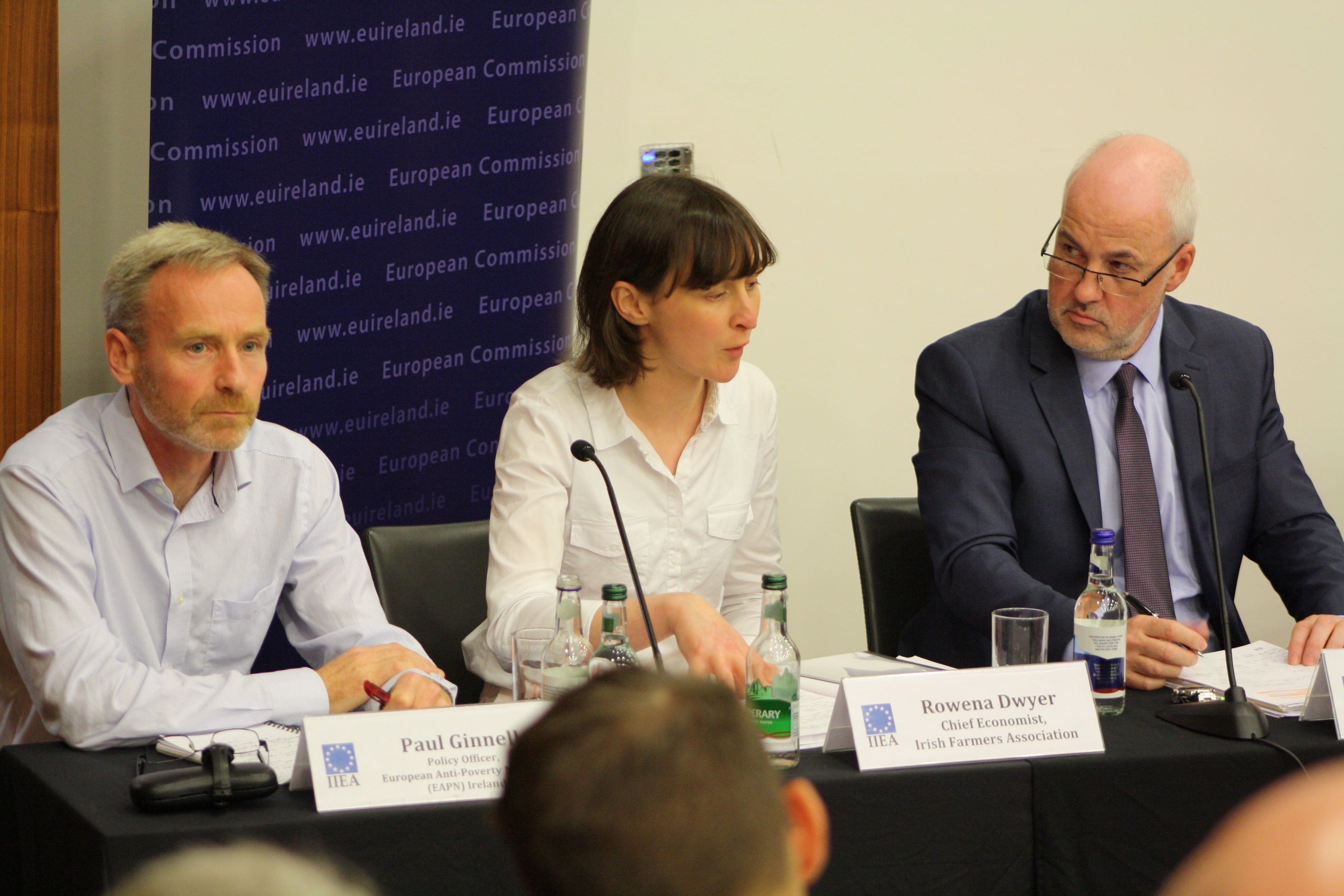 A number of topics and issues were raised in the audience Q&A session including the effectiveness of cost benefit analyses, the role of social transfers in reducing income inequalities in Ireland, best practices in the integration of refugees into the labour market, Ireland’s progress in working towards its Europe 2020 targets and the importance of investing in R&D and innovation. Director General Servoz urged Ireland to broaden its tax base and suggested that the lower VAT rate of 9% that applies to the tourism sector should be returned to normal levels unless there is evidence of job creation or lower costs being passed on to consumers. Mr Servoz said that by removing exemptions and derogations from the tax code, the Government would have greater scope to increase capital investment.

Media coverage of the seminar

Noonan says his policies have led to sharpest cut in inequality in OECD, Colin Gleeson, The Irish Times (2 June 2017)http://www.irishtimes.com/business/economy/noonan-says-his-policies-have-led-to-sharpest-cut-in-inequality-in-oecd-1.3105645