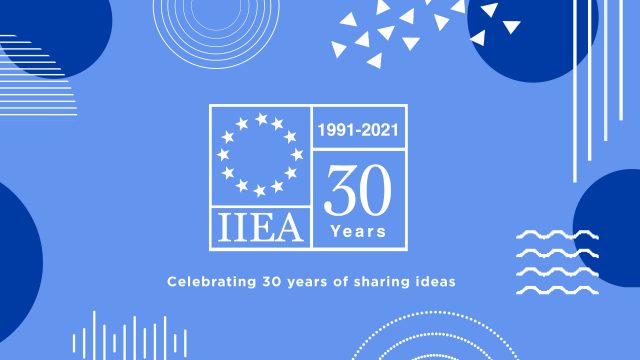 In May 2021 we celebrated 30 years since the IIEA was founded. Since then, the IIEA has played a key role in informing public discourse on European affairs in Ireland, through numerous referenda campaigns, the financial and economic crisis, and more recently, the UK’s withdrawal from the EU.Today, our mission to share ideas and shape policy, remains as relevant as it was 30 years ago. Public debate, analysis and reflection are of even greater critical importance in the age of misinformation.

To commemorate this milestone, throughout May we welcomed thought-leaders and decision-makers from across Europe and around the world. To honour our commitment to fostering public engagement and debate all events hosted by the IIEA in May were open to the public and free to attend.

As part of this commemoration, the Institute also remembered its Founder and late President, Brendan Halligan. Earlier this year we launched the ‘Brendan Halligan Essay Competition’ to pay tribute to Brendan’s commitment to fostering public debate on European affairs among young people. The winning essay, by Lisa Claire Whitten, a PhD candidate at Queen’s University Belfast, was chosen by a committee chaired by Prof. Brigid Laffan. Lisa Claire presented her winning essay, Reflections on Ireland, Europe and ‘The Northern Ireland Problem’, at our webinar discussion with Bertie Ahern and Tony Blair. You can read her essay here.

In the third week of May, running from Monday, 17 May to Friday, 21 May, the IIEA hosted a weeklong series of keynote lectures and panel discussions, as the centrepiece of our month of celebrations. These events focused on the pressing issues that will shape Ireland, Europe and the world, over the next 30 years.

An Taoiseach Micheál Martin opened the week delivering the ‘Brendan Halligan Memorial Lecture’ entitled Ireland in a Changing European Union. The webinar was chaired by Catherine Day, IIEA Board Member and former Secretary-General of the European Commission. In advance of the webinar, Uachtarán na hÉireann, Michael D. Higgins, shared his thoughts on the founding of the IIEA’s and Brendan Halligan’s legacy. You can watch back the Taoiseach’s address here.

On Tuesday 18 May we turned our focus to Anglo-Irish relations and peace on the island of Ireland. Two events considered the distance travelled in the past 30 years and the challenges ahead. Michael Collins, IIEA Director General, hosted an in-conversation discussion with former Taoiseach Bertie Ahern and former UK Prime Minister Tony Blair who shared their thoughts on peace and stability on the island of Ireland. You can watch back the discussion here.

On Wednesday, 19 May we welcomed Directors of leading European think tanks to discuss the role of think tanks in an age of anti-expertise, fake news and misinformation. Speakers included Dr Rosa Balfour, Director of Carnegie Europe; Dr Robin Niblett, Director & CEO of Chatham House; and Dr Nathalie Tocci, Executive Director of the Istituto Affari Internazionali (IAI). The discussion, chaired by Dan O’Brien, IIEA Chief Economist, is available to watch back in full here.

On Thursday, 20 May the IIEA brought together Paschal Donohoe TD, President of the Eurogroup and Minister for Finance of Ireland and Prof. Philip Lane, Chief Economist and Member of the Executive Board of the European Central Bank (ECB), in a discussion chaired by Dr. Frances Ruane, Economist and former Director of the ESRI. The discussion considered the transformation of Europe’s economy over the past 30 years and look ahead at challenges related to the COVID19 pandemic, global tax reform efforts, and emerging protectionist tendencies around the world. You can watch back in full here.

Also on Thursday, 20 May, the IIEA hosted a unique discussion on the French perspective on the future direction of the European Union with Jean-Yves Le Drian, Minister for Europe and Foreign Affairs of France and Clément Beaune, Minister of State for European Affairs of France. The discussion, which was chaired by Dr Emmanuelle Schon-Quinlivan, Lecturer in European Politics in the Department of Government, UCC, is available to watch back in full here.

On Friday 21 May, we concluded this weeklong series of events focusing on Ireland’s relationship with the United States. To outline the economic agenda of the Biden-Harris Administration, with particular regard to global corporate tax reform and the COVID-19 recovery stimulus package, the IIEA welcomed Congressman Richard Neal, Chair of the House Ways and Means Committee, United States House of Representatives. Watch back this webinar in full here.

Additional Speakers throughout the month of May included: