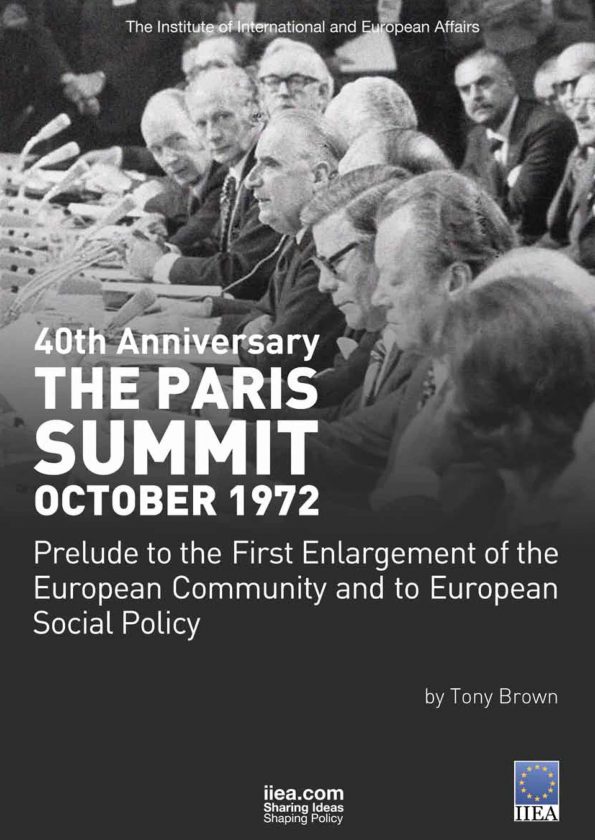 This paper marks the fortieth anniversary of a major summit in Paris, an event of historic importance in the evolution of Ireland’s engagement with the European Union. On 19 October 1972, the Heads of State or Government of the six founding members of the European Community (Belgium, France, Germany, Italy, Luxembourg, the Netherlands) and the three countries which would join the EC the following year (Denmark, Ireland and the United Kingdom) gathered in Paris. During the Paris Summit, they discussed their vision for the future of the Community and practical steps towards further integration in a number of important areas including economic and monetary union, regional policy, social policy, environment policy, energy policy, development and foreign policy.

In this paper, Tony Brown examines the summit in great depth, presenting a wide range of primary sources including the speeches delivered by the leaders at the summit, the Summit Communiqué and subsequent statements by the Government and Opposition during a debate in Dáil Éireann. He demonstrates that the Paris Summit was crucial “in giving formal reality to the Community’s first enlargement and in setting an agenda of aspiration and action for the nine members of the new European Community, not least the far-reaching goals of Economic and Monetary Union and eventual European Union”.

The paper gives particular attention to the leaders’ declarations with regard to social policy, as they provided a roadmap for Patrick Hillery, Ireland’s first European Commissioner, who took up the Social Affairs portfolio upon accession in 1973.